Many consider All Quiet on the Western Front one of the best anti-war films ever made. In 1930 it won Oscar for both Best Picture and Best Director (Lewis Milestone). But has the legendary film ever lived up to its reputation?

Last time I saw it was in November 2008,  90 years after the end of the First World War. This year, of course, marks the centennary for the outbreak of the Great War, which for me is a fine oppurtunity to reflect on the film’s impact once more. I’m a historian at The Arkivet Foundation (Stiftelsen Arkivet), a center for historical reflection and peacebuilding located in the former state archive building in Kristiansand used as a regional headquarters by the Gestapo from 1942 to 1945. Our collection of time witness films related to WWII counts more than 450 interviews with resistance fighters, prisoners, members of Quisling’s Nasjonal Samling, war sailors, Holocaust survivors, German soldiers, children at war, children of Norwegian mothers and German fathers, collaborators, and observers. Exceptionally many of them mention the meeting with Milestone’s adaptation of the German writer Erich Maria Remarque’s novel from 1929 as a watershed experience. Some say explicitly that the film clearly made ​​them reject the glorification of war and militarism. Others point out that the film was en eye-opener because of its realistic, terrifying approach. I believe that the film had broad contemporary appeal, and that its popularity went across political , social, cultural and economic divisions. Since the interwar period in Norwegian history is so characterised by these divisions, this fact may seem puzzling, or even seen as a paradox.

The original film from 1930 had a brief run in German cinemas in the 1930s before it was banned by the Nazis. Goebbels found the film anti-German and personally saw to it that the film’s producer was contacted in order to eliminate perceived anti-German messages. In 1939 there was made a new version of the film. This time, Germany put pressure on Norway and other countries to avoid that the film was imported and shown in cinemas.

In Norway it seems that the American film made ​​an impression – on everyone. Future resistance fighters (such as war sailor Peder Rørvik who participated in the D-Day operation)  as well as Norwegians who served as soldiers for Hitler (such as Eivind Saxlund). There are a few examples where it led to pacifist attitudes. And then I must hasten to add: which never was the filmmakers’ intention! Maybe with one exception. Lead star Lew Ayres himself amazingly enough got his actor career destroyed during the next world war – because he was a conscientious objector.

To Americans pacifism is un-national. Several classic films treat this theme in an interesting way, but always with the same outcome: violence must be solved with violence. Gary Cooper plays the lead role in two of them. In director Howard Hawks’ Sergeant York from 1941 he plays the naive country boy who goes from being a pacifist to beat the military at their own game. Hawks’ film dealt with America’s entry into the First World War, but must be seen as an attempt to influence public opinion towards entry into WWII prior to Pearl Harbour. 15 years later Gary Cooper played more or less the same role in William Wyler’s Friendly Persuasion, but this time the story takes place around the Civil War in the 1860s. A third is Oliver Stone’s Platoon (1986), which is often referred to as an anti-war film.

Is it possible to make war film for peace ? I remember the cheeky phrase from many a knapsack cover from my school days: “Fighting for peace is like fucking for virginity.”
When it comes to ideas and conceptions about war and peace in our part of the world, the importance of Remarque’s book and Milestone’s film could hardly be overestimated . The film both foreshadows and represents the modern and feels very important. Still. 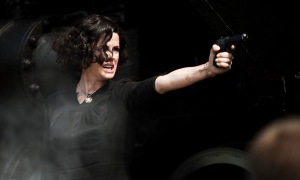 In Håkon Gundersen’s 2009 film Betrayal (Svik) the main character is a brave, independent and sexually active woman – who also knows how to handle a firearm. This is not the typical female character to be found in the 27 Norwegian WWII films made from 1946 until today.

WWII films are often masculine landscapes. Some films don’t even include women at all! As a rule, the hero (or anti-hero) is a man. So, what’s left for the other sex? As a whole the material offers four different female strategies for women in times of war. She can be either a supporter of men’s actions, a victim, a femme fatale or, under certain circumstances, a heroine. Betrayal raises the following question: Can a heroine be a femme fatale, or vice versa?

Eva, played by Lene Nystrøm (from Aqua), is a night club singer at the fictitious Club Havana in Oslo where war profiteers and collaborators meet German SS-officers – and beautiful women. Eva starts an affair with the Gestapo chief in Oslo. It turns out that the seemingly dubious Eva in fact runs a double game and that she feeds the resistance movement with vital information. Finally, her cover is blown and she has to try to make it to Sweden. Near the border she is overtaken by her pursuers. What happens next is a Tarantino’esque showdown without its match in Norwegian filmography. Everybody dies – except or heroine Eva. With her high-heel shoes in one hand and her gun in the other, she walks into neutral Sweden and survives.

The film was very badly recieved at its release in October 2009, less than one year after the premiere of the phenomenon Max Manus, which sold 1.2 million tickets from December 2008 to June 2009. Betrayal was advertised with the following promise: “If you liked Max Manus, this is something for you”. Critics and audiences didn’t agree. I think the main reason for this is that this film breaks with established genre exceptations to a Norwegian occupation drama. It blends fictitious and “true” elements in an unreliable way and doesn’t fit into the dominant popular cultural image of occupied Norway. However, Eva should be seen as a potential feminist cult figure. She’s smart, ruthless and cool under fire (literally!). So what’s the problem? The problem is not the methods she uses, but the fact that she’s a woman. She is not only willing to sacrifice her own life for a higher purpose – i.e. winning the war – but also to jeopardize her own name and good reputation. When using her body to obtain advantages she takes on the role as a woman not to be trusted.

The DVD version has an extra dimension that the cinema version lacked. An added frame story (prologue and epilogue) shows that Eva’s game with the Gestapo chief has resulted in a child and that Eva’s American family (she moved to the USA after having escaped to Sweden and London) never knew who the real father was. Until Eva breaks the news to her granddaughter.

War movies are always tales about sacrifice, courage and/or morale. Betrayal shows how difficult it is to be a woman in times of war. It’s not enough to do good; it’s equally required to represent the feminine as the beholder of the national home. “Where would we be if all women were like Eva?” seems to be the accusational rhetoric question hanging in the air. The same logic is very rarely used to assess the actions and choices made by the privileged sex. Both the portrait of Eva itself and the reception (i.e. slaughtering) of the film in 2009, accentuates the importance of gender as a way of making sense of it all when war threatens to tear all apart. It sounds an echo through history: Men must not be cowardly; women must not engage with the enemy. The femme fatale in Betrayal is very aptly named Eva, since the name is derived from the Hebrew word for … life. As we all know, life is neither simple nor fair.

The Norwegian wartime classic The missing sausage-maker (“Den forsvundne pølsemaker”) from 1942, was one of the most popular films that were shown in Norwegian cinemas during WW2. Beloved actors Ernst Diesen and Leif Juster played a hopeless detective couple, famous for quotes like: “If there isn’t anybody in there, let me know now!”

Going to the cinema was one of the few things people in an occupied country could do for the sake of entertainment. It was a cheap, readily available and safe form of relaxation. The most popular films were Scandinavian comedies. There were made more than 20 Norwegian films  during the war, and most of them were farces and light comedies. This fact tells two things: Comedies were allowed to be produced by the National Film Directorate; and the public loved watching Norwegian comedies at the cinema.

Well, there was only one problem; parts of the resistance movement didn’t want Norwegians to attend cinemas at all. In occupied Norway illegal flyers and newspapers flourished after the confiscation of radios in the summer of 1941. These newspapers were full of slogans (“paroler”) and  exhortations about cinema strike. The rhetoric of cinema strike in the illegal press was ridiculed and feared by Nasjonal Samling (NS) authorities; followed closely by the German Sicherheitsdienst; supported by parts of the resistance movement and certain audience groups; overseen, ignored and/or misunderstood by others.

According to the slogans in the illegal press the cinema strike was both necessary and successful. Any “good Norwegian” should not go to the cinema. Excactly who did and who didn’t, why and how so, is not my topic here. Instead I will reflect upon this simple but paradoxical question: Under what circumstances is it possible to get people to not looking at something desirable?

War doesn’t erase people’s desires and dreams. Imagination is a basic human condition. It is often said that the film medium is attractive to people because it offers an escape from reality. Maybe it should be seen the other way around. Certainly, the cinema has turned out to be one of the most desired places to hang out for especially young people. The cinema experience is most definitely a part of social reality, not a flight from it. There are indications that older people were more inclined to follow the anti-cinema slogans than younger people. I think this has something to do with the fact that young people didn’t (have they ever?) like others to tell them what to do. All parents are aware of the dangers of telling their children not to look at something. The child will automatically think: What’s so dangerous about it? And then goes on to investigate the matter for itself. Even more so in times of war. The exhortation to resist from going to the cinema may have been judged silly by some. Either because cinema-going was seen as an innocent thing to do, or because it was seen as an existential issue.

“Don’t look!” is not what you should say if you want people to look away. Films are made to be watched, as food is produced to feed the nation.

In my PhD project “Norwegian Cinema at War, 1940-45”, cinema theaters are seen as venues for various types of conflicts between Norwegian and German actors during World War II. Cinema was the fulcrum of collaboration and resistance in fields such as film policy, censorship and propaganda, popular actions in a time of war (strikes, boycotts and demonstrations), finance, local self-government, national self-assertion and German-Norwegian co-existence. The cinema was also a social meeting place where Norwegians and Germans met. The project will examine the relationship between Reichskommissariat and the National Film Directorate, and the relationship between NS-controlled ministries. And were the cinemas nazified?

On the photo above we see the three most prominent Norwegians who were in charge of the reorganization (“nyordningen”) of film and cinema in Norway from 1940 to 1942. From left: dr. Gulbrand Lunde, Minister of Propaganda from September 1940 to his death in October 1942, Vidkun Quisling, and Leif Sinding, director of The National Film Directorate (Statens filmdirektorat) from 1940 to 1942.

More about my PhD project: